Wednesday evening we came upon a group of three lionesses and seven cubs, four of which were just a couple months old. The next morning we were out counting game again. The afternoon game drive ended up being a "surprise" road work day, moving logs and pieces of dead wood to mark a track. Doing a little game drive afterward turned into a big adventure. With a large storm approaching, our driver tried to go across a rather large rock…. no luck. After several tries he did succeed in breaking the suspension. So with rain pelting down, miles from anywhere, it was car repair time. A couple of hours later, we were on our way and leading the other vehicle out…. and the new driver didn’t know the way. Guess what? He got a flat. What a night!

Friday we did a grass monitoring project, helping the conservancy assign land for the Masai to graze their cattle while leaving enough grass for the game. Because we finished quickly, we had time to find a cheetah having breakfast on a fresh kill and then about 50-100 vultures fighting each other over a lion’s kill. It was an exciting morning. In the afternoon we visited a woman’s project, tried to learn their beading techniques, and played with the children. After that it was off to the "town" of Talik to get the car repaired. We hung out at some local spots for a couple of hours before heading back to camp.

Yesterday, we treated ourselves to a day and overnight at one of the real safari bush camps near the project. Gorgeous, real showers, gourmet food and a flush toilet. Heaven! 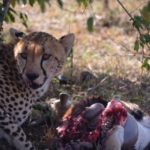 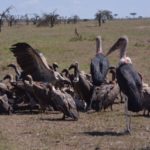 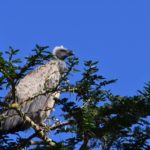