We had another giggle start. Up for a really early game drive only to find that the Land Rover had a bad battery. Hakuna Matara! We saw incredible game but interestingly, no cats….yet…and more interesting, the bird life that is usually so prolific is basically nonexistent. We ended this morning’s drive with a visit to the Jane Goodall Chimp Sanctuary. After lunch, we were allowed a private visit and tour of the Northern White Rhino Sanctuary. There are only three of these magnificent animals left on the planet…..yes, even including zoos! At Ol Pejeta they are attempting, with the help of scientists from all over the world, to do IVF. If this doesn’t work, the Northern White Rhino will be gone forever in a very few years. After more game viewing, we went for a behind the scenes tour of the Chimp Sanctuary. Again, it was so much fun to be remembered by some of the staff…we continued on the drive until well after dark. The only nocturnal animals we saw were a white tail mongoose, an owl, and a night jar. Still no aardvark! At the very last minute, as we were approaching camp, we finally found a group of female lions and her cubs. Back to camp for a fantastic dinner and to bed. Murphy visited again by having the airline change our flight time tomorrow to a VERY early departure. That’s ok because it will give us more time on the Mara. 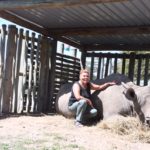 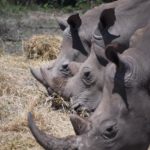 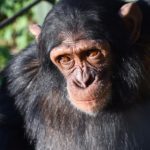 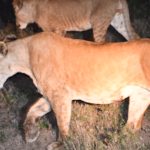